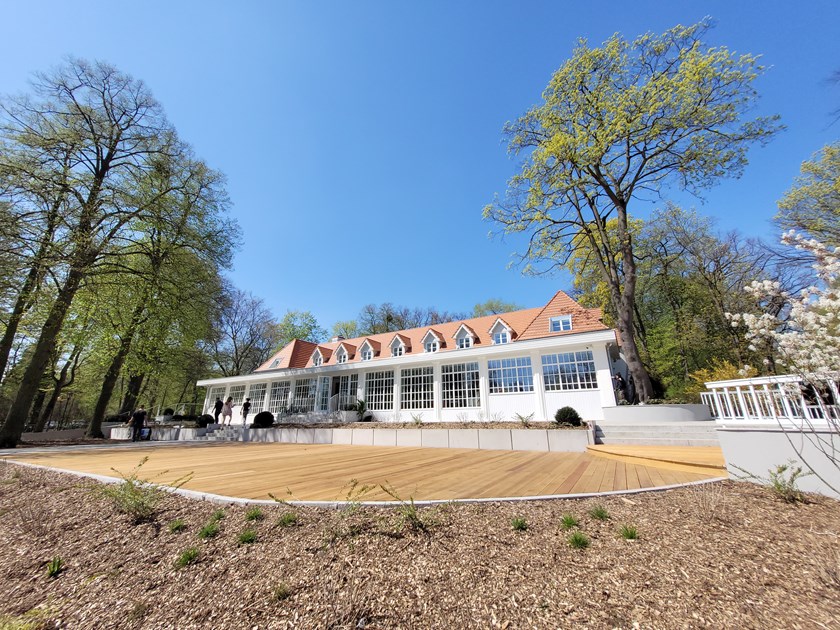 Sołacki style and character of a holiday resort, this is how Port Sołacz can be briefly described. Grupa MTP has created an elegant but accessible restaurant and apartments here. − We wanted to combine history with modernity. ‘Port Sołacz’ is a place for coffee, a casual brunch with friends, a family meeting, but also an elegant dinner in a business circle − says Filip Bittner, Vice President of the Management Board of Grupa MTP.

A building with history

The building where Port Sołacz is located was built for the East German Exhibition, which was held on the site of today’s MTP Poznań Expo. It housed a wine bar at that time, so it was a perfect dining establishment. It was transferred in 1912 to Sołacki Park. For over a hundred years, the restaurant operated here under various names, but it has always been one of the most famous places in the city. 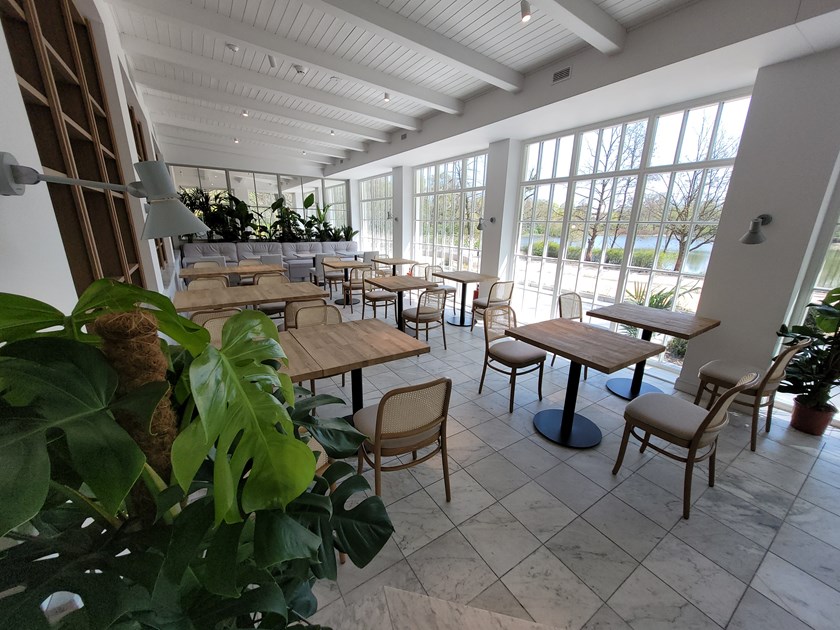 The building had two towers for ventilating the main hall, and the entrance to the restaurant was topped with a circular front. The restaurant also had a glazed porch at the front, in which on hot days windows were removed by waiters. The restaurant was an ideal place to observe not only the beautiful park and soothing nature, but also the social life of the city, as well as the struggles of amateur rowers on boats, whose rental shop opened here in 1913.

After the war, the park was still a place of rest for Poznań residents − they used to go to the restaurant (which was already called Wypoczynek [Rest] and lost its towers), go on dates, go boating, ice skating, and to dance parties. Another attraction was the parachute jumping tower, which was over 30 meters high. In 1977, boats disappeared from the park. The nationalised restaurant changed its name twice − then it was named ‘Pod Strzechą’ [Under the Thatch], and after a thorough reconstruction − ‘Piracka’ [Pirate Inn]. In 1992, the building was privatised, and after the conversion according to the design of Piotr Wędrychowicz, Meridian hotel and restaurant were opened there. They operated until 2015. 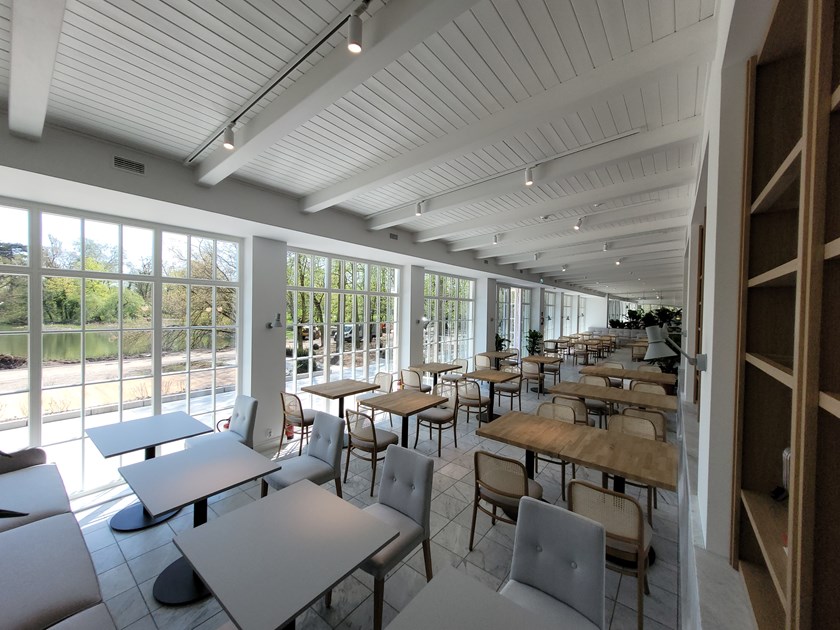 Years later, history came full circle, and the facility was leased by Grupa MTP from the Board of Municipal Housing Resources. The building required thorough renovation, which included the roof, facade, adjoining area and interior. The body retained the dimensions from the time of the conversion in 1992, but regained the façade character similar to the original design from the beginning of the 20th century. EV Architects Ewelina Jankowska from Poznań was responsible for the adaptation design. The contractor and investor is Grupa MTP.

− We wanted to restore the former splendour of this building and create a place that encourages city relaxation, but respecting the tradition of the district and in harmony with its inhabitants. Therefore, before starting the investment, we conducted social consultations with the council of the Sołacz estate. We wanted the space around Port Sołacz to be clean, green and meet their needs − says Filip Bittner, Vice President of the Management Board of Grupa MTP.

− The local style was the inspiration. The design refers to the original character of the building, which, together with a colony of luxurious villas by J. Stubben, fit into the natural Bogdanka valley to this day. External changes are conservative. The bright wooden conservatory is to create an atmosphere reminiscent of the old park atmosphere, conducive to relaxation. For this purpose, we have also designed extensive terraces immersed in greenery overlooking the Sołackie ponds. We have enlarged the windows of the wooden orangery part, which open onto the terrace. They now reach the floor and refer to the original appearance, they feature strongly emphasised muntins restoring the plasticity of the façade − says architect Ewelina Jankowska, from the EV Architects studio, responsible for the entire modernisation project of the building and interiors throughout the facility.

The interiors of the building will be decorated with historical photos of the villa district and Sołacki Park, as well as original graphics by Piotr Kuchciński, one of the most recognisable Polish designers. Abstract works presenting geometric shapes, simple forms and colour combinations, were designed by the artist at the special request of Port Sołacz. 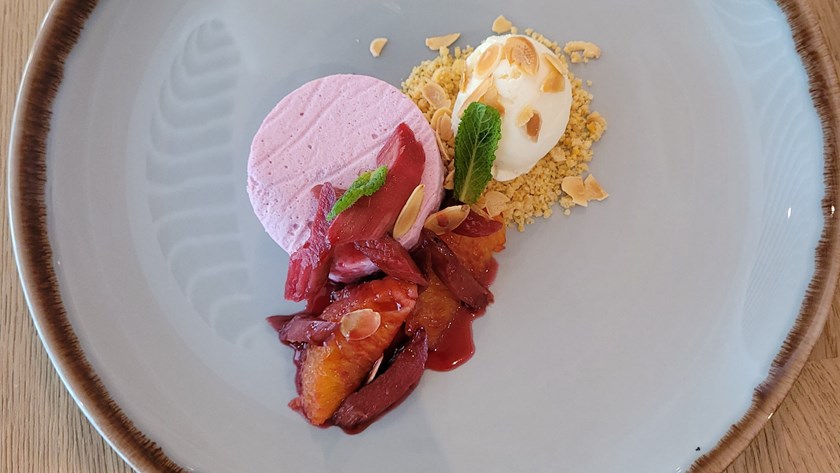 Excellent cuisine and wines from around the world

There will be as many as 155 seats inside the restaurant. In the summer season, 120 people more will be able to use the restaurant’s terrace. The outer part of the building will be a holiday resort with two terraces and a summer bar.

Port Sołacz is a casual dining restaurant. The Port’s offer will be extensive and will satisfy the tastes of both connoisseurs of good cuisine and wine. The restaurant will serve original dishes, the originators of which are two chefs − Bartosz Fabiś and Michał Kozłowski. They are both winners of the Polish Culinary Cup 2019, the most important competition for professional chefs in Poland.

The restaurant alludes to its historical origins, when there was a wine bar in it. The Port Sołacz wine bar will offer a wide menu with top wines from around the world. Here you will be able to choose from over 100 indexes.

The facility will be available to residents of Poznań who would like to drink coffee and eat dinner. In Port Sołacz, they will find an interesting breakfast offer, selected coffee and pizza. The speciality of the restaurant will be bread baked on the spot. You will be able to eat here, for example, ‘ordinary hunk of bread’ served in a surprising way. There will also be a take-away menu in the grab&go option.

The restaurant will accept reservations for the organisation of business events, but also special events, communion and wedding dinners, for a maximum of 50 people. Closed events will not collide with the opening hours for individual clients. The facility will not be closed during special events.  Reservations can be made by contacting the following e-mail: hotel@portsolacz.pl or by phone at +48 696 102 225. There are still available dates for the coming season. 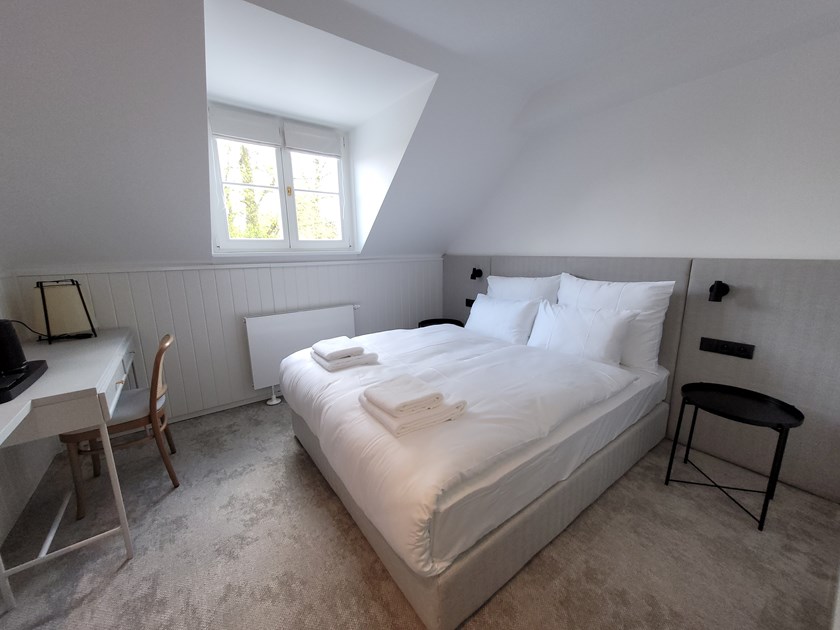 Port Sołacz offers 20 beds in Standard and Deluxe rooms. − The rooms are designed coherently and consistently in the same style, giving the impression of holiday relaxation. The bright, minimalist interiors are to make guests feel relaxed and at ease − says Ewelina Jankowska. The furniture design is proprietary, made to order for the hotel. Each room has a separate bathroom, minibar, WiFi and TV with access to radio and TV programs. The rooms are air-conditioned. The facility will be equipped with a lift and will be fully accessible for people with disabilities. Guests will also be able to enjoy breakfast served in the hotel’s restaurant. 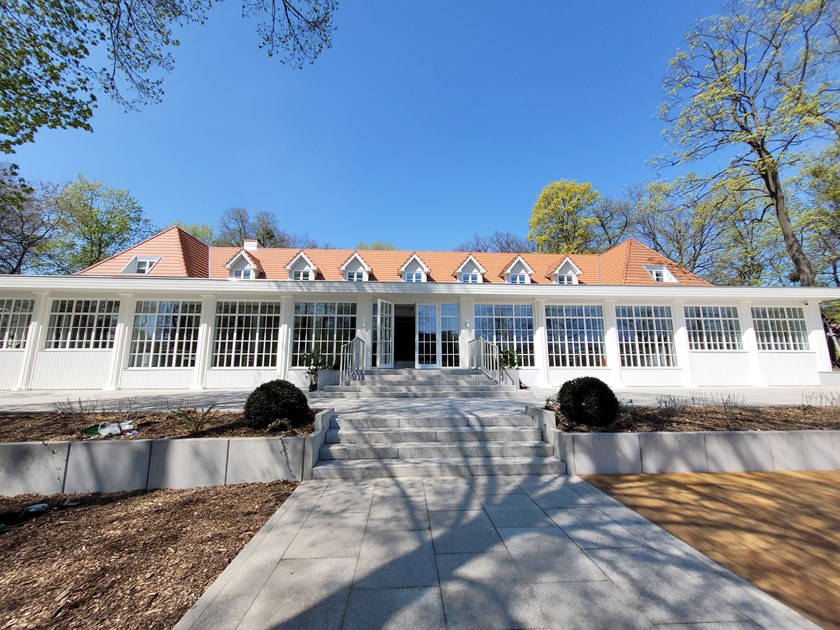 The return of social life

From the beginning of the creation of the Sołacki Park, social and cultural life flourished here, because, unlike other Poznań green areas, it had a more relaxed atmosphere. Dances, concerts, performances, festivals and Sołackie Fairs were held here.

− We want Port Sołacz to be vibrant with life. The facility will host cyclical cultural events, concerts and dinners.  Tastings of wine and food from different regions of the world and workshops with sommeliers will also be held here. There are also plans to return to summer, open-air village council concerts − adds Filip Bittner.

Leaders of the innovation sector will appear in Poznań